You can instruct PC*MILER to either favor or avoid certain states when generating a route. Let’s recalculate our Maine to South Carolina route with its current settings, but this time we’ll avoid routing through Massachusetts, and favor routing through Vermont.

1. With the Route 1 window active, press the <F6> key or select the gear button > Reports > State/Country to view a summary of mileage, times, and costs listed alphabetically by state. Examine the list of states to confirm that Route 1 travels through Massachusetts. 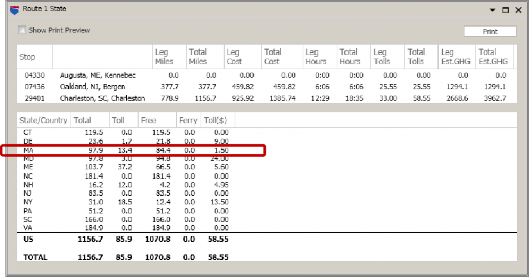 3. Check Enable in the top left corner of the States/Roads Manager (this must be checked for state preferences to work).

4. In the pick list of states, scroll down and highlight Massachusetts. Click the Avoid button below to add that state to the States to Avoid list on the left.

5. Now highlight Vermont on the pick list of states, and click the Favor button to add that state to the States to Favor list on the right.

6. Close the States/Roads Manager window (your changes will be saved). 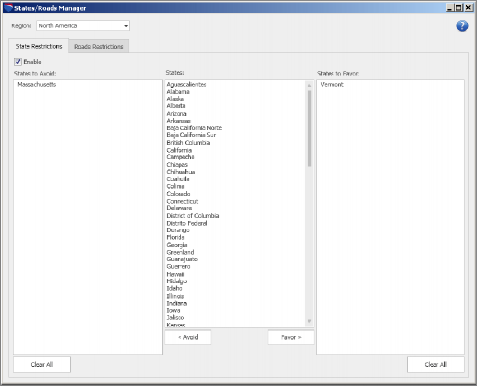 7. A new customized route will automatically generate in the route window, and the State Report will be updated accordingly. In the report, you’ll see that PC*MILER has plotted the new route completely outside of Massachusetts, using Vermont and New York State as a byway. Check this new route on the map, too. 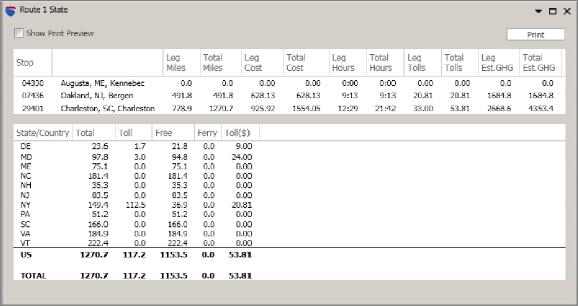 8. Close the Reports window to continue.

For More Information and to Request A 15 Day Free Trial!

Get The Free Trial